The veneer market is extremely difficult. Canadian veneer producers are more concerned with selling the production from their facilities than they are the price at which they are selling veneer. With the exchange rate at $1.29 per US dollar, it is hard to argue with their logic. Domestic producers have also contributed to the over-supply of veneer by equipment upgrades and production efficiencies. Installation of new lathe lines such as Swanson’s rebuilt Springfield facility just adds fuel to the fire. At Freres Lumber Company we have seen a $1.00 decrease in 1/10 DF CD 54 over the past two weeks. While not desirable considering the cost of our incoming logs, the measured price decrease is an indication that veneer plants are fighting for every cent they can. The other encouraging news is that veneer producers are decreasing veneer volumes incrementally through shorter production weeks or increasing panel production to use more veneer in-house.

Over the last year the US market has lost two large panel producers; Olympic Panel Products in Shelton, Washington and Weyerhaeuser’s (formerly Plum Creek) Columbia Falls facility. Both of these production facilities produced high-grade plywood panels for the industrial markets. Now that they have disappeared, the high-grade veneer market has evaporated. There is currently a void in the high-grade panel market and it will be very interesting to see who fills the hole.

The Northwest desperately needs additional finished panel production to utilize surplus veneer. Panel producers are extremely skittish due to the market dampening effects of the wall of imports that are coming to the US. There is little interest to invest in production capacity when it seems foreign producers will undercut them at every turn.

Hardwood panel companies are being especially harmed by Chinese imports and have lost the majority of market share domestically. Incoming Brazilian sheathing panels have led to a steady drop in Southern Yellow Pine plywood. Sanded producers still sting from a 12% increase in Chilean specialty panel imports. It seems that the US is the only destination for wood products. Sometimes free trade doesn’t look like fair trade. 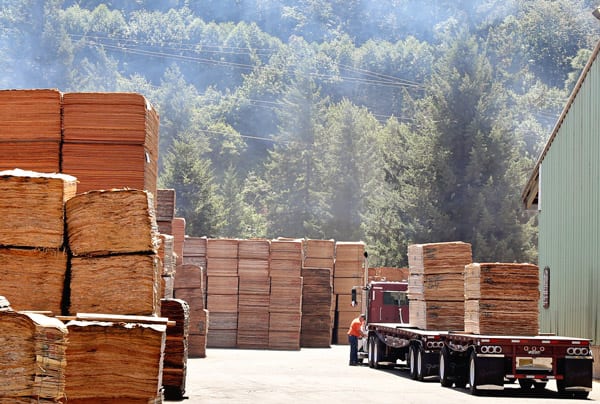 Mixed expectations for the coming months

The two bright spots are Western fir plywood and Western LVL production. CDX plywood has been strong and stable as we enter into fall. We anticipate continued strength for the next few weeks, as September and October are generally good months for construction. After that it could very well be a difficult winter for CDX plywood. The LVL market is currently projecting a strong fourth quarter. Current indications from customers are that their sales are brisk and are set to increase further. We hope this is true as LVL consumes a large portion of our veneer capacity.

Coming up at Freres Lumber Company

Over the next couple of weeks we will be completing the installation of the Hew Saw and other associated equipment. This project has taken almost 3 years of planning to bring to fruition and we are really looking forward to finishing it. Expect an increase in cores around the Freres Lumber yard, as the stud mill will be down for the week while the veneer plants will continue to run. Once the Hew Saw project is completed we should have more flexibility in our run schedules.